When hope and spontaneity collide.

At the beginning of October Barry and Zarah Doyle were among a number of families who travlled to our training centre in Blarney to complete their assistance dog training. Below Zarah & Barry tells us of their story. 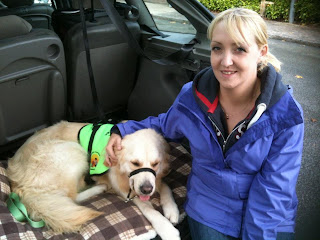 When we received the diagnosis of Autism for our son he was 4 years old. His attention span was non existent and was consumed by his own little world of Thomas the tank engine, aeroplanes and cars. He also would run off at the first chance he got which was very stressful and he became very unpredictable when we were out in public.


We discovered his love of animals when he first attended preschool. His teacher had a cat and she had noticed that after Luke had spent five minutes around the cat he was far more regulated and could concentrate in class for longer periods of time. We had heard about children on the autism spectrum getting assistance dogs to help tackle this problem. We applied for a dog through other charities however the waiting lists where so long and we became impatient because we could see the benefit of having animals around Luke.


We had a sudden burst of spontaneity and went to view a litter of golden retriever puppies in Ballitore Co. Kildare. It quickly became clear to us that we were not walking out of there without one of these absolutely adorable dogs! I think I would have taken them all home with me if I could. Thank god I came to my senses before that happened.
Most of the puppies were running around the garden and one came up to Luke and seemed to take a liking to him, Luke thought this was hilarious and that was our decision made for us, we collected our gorgeous 8 week old puppy two days later. When we got him home we named him Toby. The kids were besotted with him.
I started thinking about how we were going to train him and asked a few people I knew who had already had an assistance dog if they knew anybody that could train a puppy to become a qualified assistance dog.
I was given Cliona Rourke's contact details. Cliona was well know in the world of assistance dog training. Cliona was in the process of setting up her own charity and she came up to see us and explained all about a new charity and what she hoped to achieve. Talk about meant to be!!


Cliona thought Toby had an ideal temperament to become an assistance dog and started us on a puppy socialising programme. Toby received a "puppy in training" jacket. This meant we could bring him everywhere with us, shopping, school runs, relatives homes everywhere we went he went. We had a lot of stuff to learn ourselves and we attended group training classes with other parent/puppies in the programme.
We watched him grow from a clumsy puppy into a very handsome good natured adult. Toby is absolutely part of the family, it is such a relief to have a dog that Luke is so familiar with and that such a strong bond has already been established.


At 14 months he went to Cork for his full assistance dog training. His absence left a big hole in our family but we knew that when he returned he would be a fully trained assistance dog. As Toby's training was coming to an end we also travelled to Cork to be trained. It was so good to see Toby again and he was so happy to see us.

Because we had been on the puppy training programme a lot of what were taught in Cork was stuff we already knew but it was great to be able to practise with Cliona and the other trainers. Toby looked so proud in his new jacket as we walked around Cork with the other families in the class. At the end of a very long couple of days Toby was graduated to a full assistance dog and we headed home to Kildare.

We now have a fully trained assistance dog but one hurdle remained; The attachment!! As we waited for Cliona to call to our house we wondered how the attachment would go. Luke and Toby are best friends, they have grown up together, but how would Luke react to being tethered to Toby? We soon got our answer.

Only back from training in Cork a few days and Cliona and Linda arrived. Cliona likes to do the attachment in the area where the family live so that the child is in familiar surroundings and not distracted. We need not have worried, the attachment went perfectly. It was amazing to watch as Barry held the lead from behind and Luke and Toby strolled along like any normal little boy with his dog.

This has been an amazing journey for us as a family. My Canine Companion is not just another assistance dog charity, it is a lot more then that. It is like a big social network of people. We all have one thing in common; we live and deal with Autism on a daily basis and we have turned to this wonderful charity to help us in that fight through the assistance of wonderful dogs such as Toby.

My Canine Companion has 13 fully trained assistance dogs partnered with families across Ireland. If you would like to know more about our Charity and the service we provide please visit our website www.mycaninecompanion.ie

Posted by My Canine Companion at 03:44